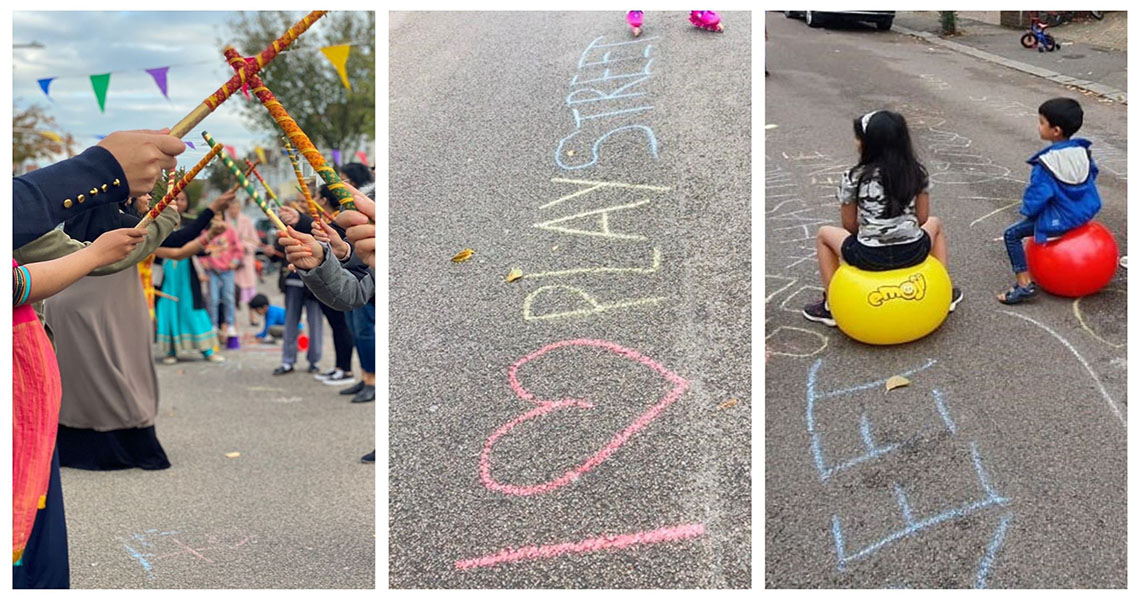 Turn your street into a vibrant, fun community through ‘Redbridge Play Streets’

Local people across Redbridge have been embracing a local initiative that enables them to close off their road to traffic for a few hours a month so that neighbours, children, and families can socialise and play out together on the street safely.

Successful Play Street applicants are provided with a legal notice from the council enabling them to close their street to through traffic at specified days and times.

Neighbours volunteer to ‘steward’ the road closures, enabling children to play freely on the street and neighbours to socialise and get to know each other better.

A Play Street can be as simple as children chalk drawing and playing games, and neighbours sharing a coffee, cake, and chat, to full blown community parties, tug of war and Zumba classes being held on the street! Bringing the street together is also a great way to build a friendly neighbourhood network, and support anyone who might be experiencing isolation or loneliness at home.

So far more than 20 Play Streets have been approved by the council and are being run across Redbridge as part of the council’s commitment to becoming a UNICEF UK accredited ‘Child Friendly Borough’.

One of the first residents to run a Play Street in the borough was mum-of-four, Nargis Jahan.  Speaking about the Play Street she runs in Barkingside, Nargis said: “I got to know more people on our street in the first two months of Play Streets then in the two years I’d been living there.

“Starting a Play Street is one of the most positive and beneficial things you can do for your street, community and family as it brings people together, creating new friendships and more active neighbourhoods.

“It’s great to see children playing outdoors together, and different generations and cultures coming together and bonding. I can honestly say Play Streets has brought our street alive. We’ve created our own little community, and some of my closest friends now are the ones I made through Play Streets.”

Nargis also revealed the secret of their successful Play Steet, adding: “We always have food! Food always brings people together! We’re also lucky enough to have neighbours that really want to pitch in to help make our Play Street a success, whether its contributing food, printing signs, or donating equipment. It’s a real team effort and we’ve organised some wonderful activities and events on the street as a result.”

Applications are currently open for new Play Streets submissions, with a call for even more residents to join the community minded movement that is reviving neighbourhoods across the borough. Apply now: https://www.redbridge.gov.uk/leisure-sport-and-the-arts/play-streets/

Redbridge Cabinet Member for Environment and Civic Pride Cllr Jo Blackman, said: “Play Streets improve children’s health and well-being, as well as building stronger communities and a sense of belonging. We’re keen to keep growing the number of Play Streets in Redbridge and are encouraging local people to be part of this community-minded movement, which is already having a positive impact on many neighbourhoods across the borough.”

For more information on Redbridge Play Streets head to: https://www.redbridge.gov.uk/leisure-sport-and-the-arts/play-streets/

The global programme encourages local services to commit to fulfilling children’s rights. The aim is to create a city or community where the voices, needs, priorities and the rights of children play an integral part in public policies and programmes, as well as being involved in the decision-making process.

Find out more about Child Friendly Redbridge and the council’s work towards Redbridge becoming a UNICEF-accredited “Child Friendly Borough”: https://www.redbridge.gov.uk/childfriendly/