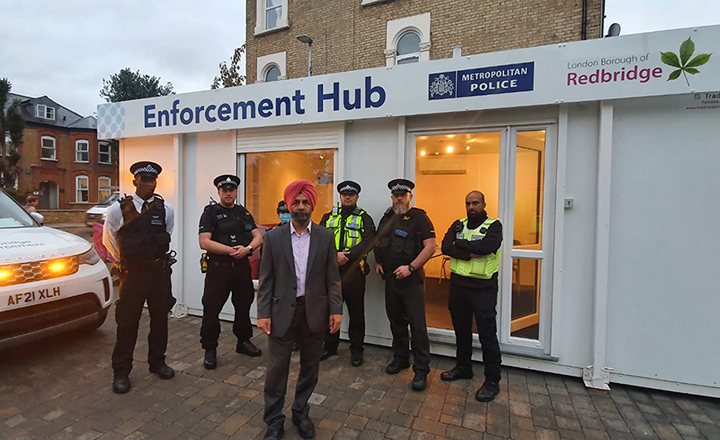 A new community Enforcement Hub is now up and running in York Road, as part of Redbridge Council and the Metropolitan Police’s ongoing campaign to tackle crime and anti-social behaviour in the borough.

Leader of Redbridge Council Cllr Jas Athwal visited the Hub on Thursday 30 September to hear from residents about their crime and community safety concerns in the area around York Road.

Residents living in the York Road area are also being invited to have their say, and hear updates on the ongoing work to cut crime locally, at a further community event being held at City Gates Church in Clements Road, Ilford on Friday 1 October at 6pm. Cllr Athwal will be joined at the event by Acting Area Commander of the Metropolitan Police Paul Trevers.

Cllr Athwal said: “Cracking down on crime and anti-social behaviour in Redbridge is our absolute priority. We’ve listened to the views of thousands of residents and have already made real progress towards ensuring neighbourhoods across the borough are safer for everyone. But there is still much work to be done and it’s vital that we continue to hear your feedback, so we can target our ongoing enforcement actions to where they will have the most effective and lasting impact.”

The installation of the Enforcement Hub in York Road followed a series of street surgeries and meetings with residents held throughout the summer. There have also been increased visits to the area from Redbridge Enforcement Officers, with evening vehicle patrols and a daytime foot presence.

The new York Road Enforcement Hub is open every Monday, Wednesday and Saturday between 4.30pm and 6.30pm. Police officers and council enforcement officers are available at each session, to listen to views on local issues.