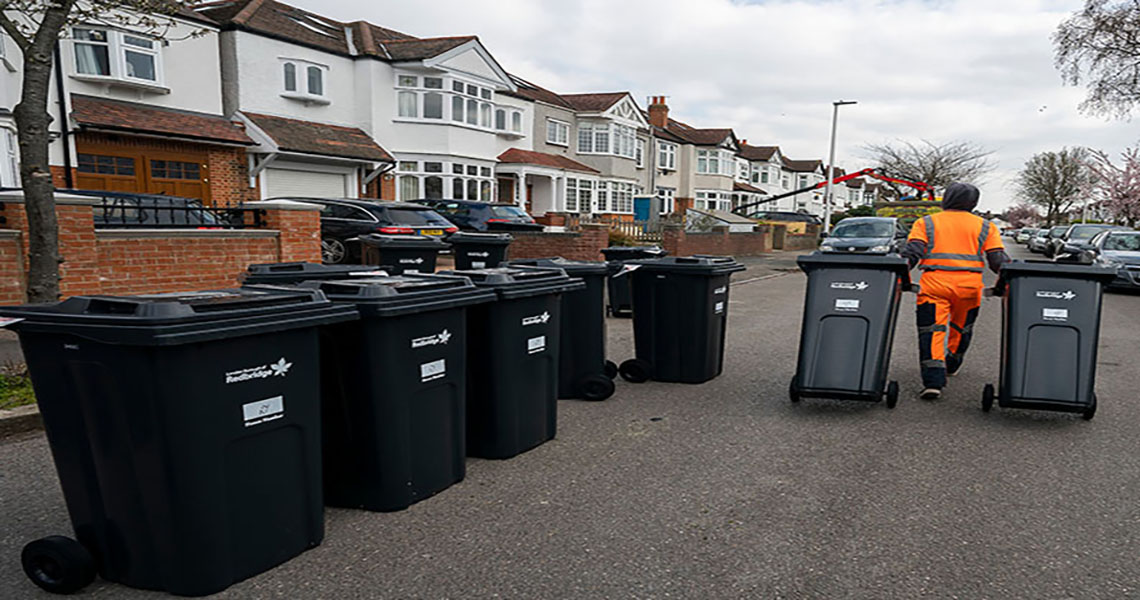 The borough wide roll-out of wheelie bins in Redbridge is now complete after council crews successfully delivered the final bin.

The last bin was recently dropped off to a property in Chadwell Heath, Redbridge, bringing the main distribution to an end, with 85,000 households in Redbridge now supplied with a wheelie bin.

The milestone marks another step forward in the borough’s commitment towards creating a greener and cleaner Redbridge. Not only will the bins store waste more securely - preventing animals from ripping bags open and littering the street, they also encourage residents to recycle more as only waste contained in the bin will be collected. The more households can recycle, the more they can maximise the space in their bin.

Although the main distribution of the wheelie bins is now complete, crews will still be in action for a few more weeks dealing with bin swap requests for larger or smaller bins, and addressing any requests from residents that think they may have been missed from the roll-out. They will also continue to collect for disposal any privately owned wheelie bins under the council’s Bin Amnesty scheme, and the great news is that every part of the bins being collected for disposal will be recycled!

Redbridge resident, Vicky Taylor, from Wanstead Village, said: “I’m ecstatic about my wheelie bin! It makes my life easier. I can throw my rubbish in, and move the bin around easily on collection day - and no more foxes ripping up bags of rubbish put out the night before!”

The introduction of wheelie bins falls under the borough’s Waste Reduction Strategy to help reduce the amount of waste being produced in Redbridge.

The wheelie bin roll-out also forms part of the wider work being carried out in the borough to tackle the climate emergency, and was one of more than 100 actions listed in Redbridge’s Climate Change Action Plan, released this week (Tuesday 1 June).

Under the Action Plan, waste was identified as one of the sources of carbon emissions in Redbridge, and a red flag area for action.

Find out more about Redbridge’s Climate Change Action Plan on:

Cabinet Member for Environment and Civic Pride Cllr Jo Blackman said: “Crews have been working tirelessly over the last few months to complete the roll-out, and have done a fab job in ensuring 85,000 households across the borough get a bin. The move to wheelie bins is another positive stride forward in the work being carried out across the borough to create a greener and cleaner Redbridge.”

Although the main distribution of the wheelie bins is now complete, crews will still be in action for a few more weeks dealing with bin swap requests for larger or smaller bins, and addressing any requests from residents that think they may have been missed from the roll-out, as well as continuing to collect for disposal any privately owned wheelie bins under the council’s Bin Amnesty scheme.

With wheelie bins now in operation across Redbridge, the council is encouraging residents to explore ways to reduce waste. 50% of waste collected in Redbridge is food waste, and in the UK it’s estimated one in three bags of food bought ends up binned. An average family of four could save up to £720 a year by reducing their food waste!

Redbridge resident David Gilchrist, from Cranbrook, said: “I’m a keen recycler. It would take me about two weeks to fill my wheelie bin! I’ve also started home composting. There’s lots of easy ways to reduce your waste once you look into it.”

For more information and advice on how to cut down on household waste go to: www.redbridge.gov.uk/our-streets/

For more information about Redbridge’s Waste Reduction Strategy go to: