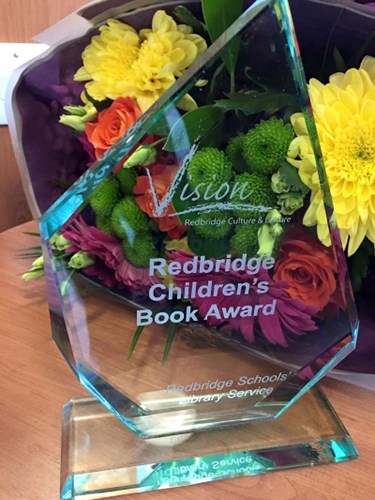 Each year, we run the Redbridge Children's Book Awards.

The awards process starts in September and ends in June. We invite all schools in the Borough to take part in the awards and vote for their favourite children and teen books published in the UK in the current year.  There is an opportunity for students to get signed copies of the shortlisted titles and meet the authors whose books they have voted for.

The award is still evolving and each year will build on experiences from the last. The first year we ran the award, 4 schools took part. This year, 16 secondary schools and 9 primary schools are taking part.

Redbridge Schools Library Service invites all schools in the Borough to take part.

School librarians, teachers and library staff select a long list of 15 children's titles and 15 teen titles from books that have been published in the UK in the current year and aren't sequels.

Sets of the longlist titles are sent to each participating school and library reading groups. Students chosen to take part are encouraged to read and discuss which books are their favourites and reasons for their choices.

Schools send in a list of their top 8 children's and 8 teen books and the shortlist is announced.

Final voting on the shortlist.  Winners and runners-up invited to the ceremony.

All the participating schools and groups get together for a celebration of reading. The shortlisted authors are invited along to meet the students who have chosen their books.

There is a quiz on the shortlisted books, a question and answer session and the opportunity for students to get signed copies of the shortlisted titles and meet the authors whose books they have voted for.

The winning authors are presented with their award.

For more information on the awards or how to sign up, contact Nina Simon on 020 8708 2423 or email nina.simon@visionrcl.org.uk