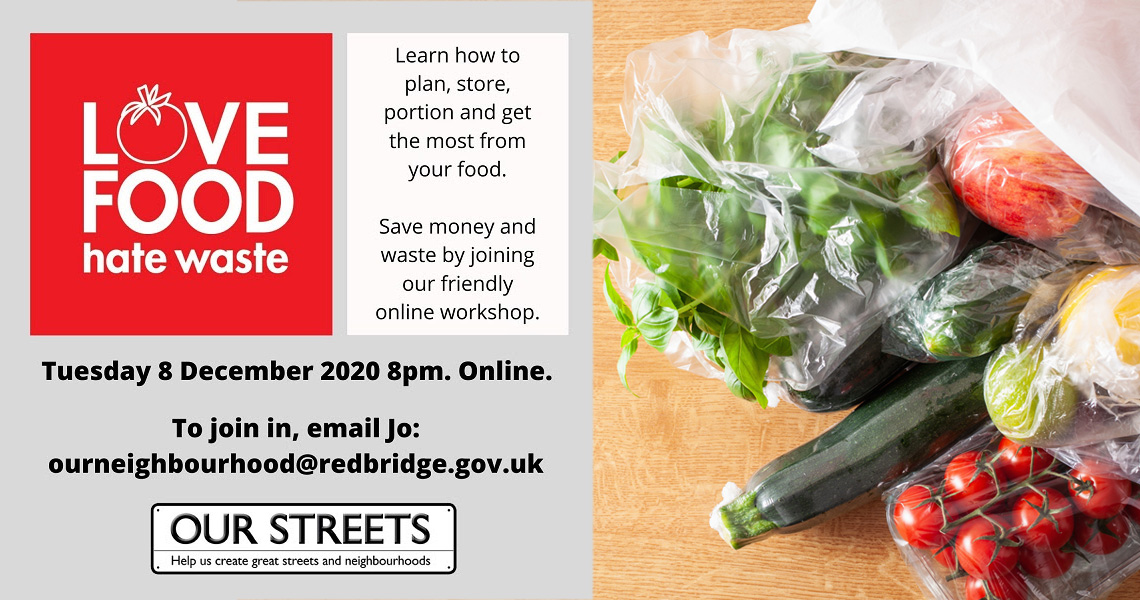 Got a little too much on your plate? Lots of us do, with a large amount of the food we buy ending up in the bin.

In support of the new national campaign Wasting Food: It's Out of Date, Redbridge Council is running an online workshop offering top tips and advice on how to reduce food waste, especially with Christmas approaching.

Everything we throw away has an impact on our environment and contributes to climate change. Because it’s not just the food we’re wasting – it’s the resources that go into producing it that get wasted too.

Email ourneighbourhood@redbridge.gov.uk for an invite to the workshop and more information.

Cabinet Member for Civic Pride Cllr John Howard said: “We’ve all been guilty of wasting food, from not eating that last slice of bread to throwing away leftovers that could have been frozen, but it’s never too late to start making little changes that will have a positive impact on the environment.

“Our free online workshop is the perfect start to getting all the tips and advice you need to help you on your way to becoming a pro at minimising food waste.”

The December workshop will explore food planning, storage and preparation to help save you money and waste this winter.

By making small changes to the way we buy and use food in the borough, we can change the amount of food being wasted which will also have a big impact on the environment. Each small act can add up to make a big difference.

Don’t believe us? Check out these facts:

70% of wasted food comes from our homes - Each year, UK households throw away 4.5 million tonnes of food that could be eaten, with some of the most common products being milk, bread, potatoes, tomatoes, bananas and poultry. If every person stopped throwing away food for just one day in the UK, it’d do the same for climate change as taking 14,000 cars off the road for a whole year.

You should cry over spilt milk - We throw away the equivalent of 3.1 million glasses worth of milk a day - it can be from putting too much in our cereal or that unfinished cup of tea. It takes 358 million cubic meters of water to produce this milk, and 31,000 hectares of land used for production is also wasted. If we only bought the milk we needed, or always used every drop of the milk we bought, every year we could do the same for climate change as planting 5.9 million trees.

Don’t chicken out of reducing food waste - Every year, UK households throw away poultry that could have been eaten, and in throwing it away we are also wasting a land area the size of East Sussex needed to produce it. If we all stopped wasting poultry, by storing it properly or eating our leftovers, we could prevent the 396,000 tonnes of CO2e emissions created in its production being wasted.

Ketchup on the facts about wasted tomatoes - In the UK we waste 1.2 million tomatoes a day, which generates 113,000 tonnes of CO2e through the labour that goes into the seeding, watering, the fertilisers, harvesting, and transporting of tomatoes just to get them on your plate to start with! Over a year, saving your tomatoes and the valuable resources that have gone into producing them would do the same for climate change as planting 1.8 million trees!

For more info about the Wasting Food: It's Out of Date campaign go to: www.outofdate.org.uk