Come and listen to an update on the work to reduce crime on and near York Road on Friday 1 October 2021 at City Gates Church, Ilford from 6pm (please note the change of venue).

Join the Leader of the Council, Cllr Jas Athwal and the acting area commander of the Metropolitan Police, Paul Trevers.

Message from Cllr Jas Athwal - The Leader of Redbridge Council 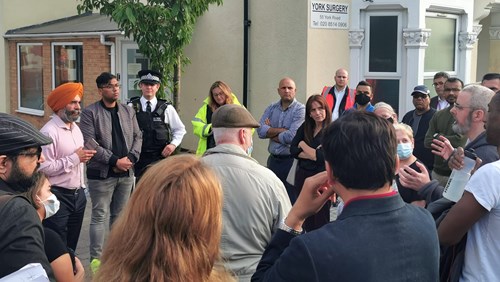 Cllr Jas Athwal and Cllr Khayer Chowdhury held a street meeting with residents on York Road to listen to concerns and explain action being taken by the council and police.

On Friday 3 September, I along with, police, enforcement officers, trading standards officers, licensing officers and Cllr Khayer Chowdhury, the Cabinet Member for Crime, Safety and Community Cohesion led a street surgery meeting in York Mews to meet with local residents about the work that the council and police have been doing to tackle the anti-social behaviour and crime issues that have increased around York Road.

As a resident of the borough for 51 years, I share your concerns about the rise in anti-social behaviour and crime around York Road and as the Leader of the Council, I will ensure that Redbridge council does everything it can within its power to work alongside the police to tackle this problem.

I would like to thank all those residents who were able to attend, and those who shared their concerns and experiences. At the start of the meeting I updated residents on the work that is being done to tackle the problem head-on and then I along with Cllr Chowdhury, police and council officers took questions from residents.  I also spoke about the complex factors which have led to an increase in crime and anti-social behaviour the area.  This included the number of people that have been housed in cheap hotels and hostels by other local authorities, some of whom have complex needs and support requirements.

To date, the council has taken the following actions:

In addition to these measures, I have worked with senior police figures to push for a step-up in police presence in the area. Police Chief Inspector Chris Nixon and his team have undertaken the actions outlined below:

In addition to these interventions, residents made a number of suggestions that we are actively working with the police to implement:

This is a selection of your suggestions and ideas that we are working on. During the street surgery I committed to updating you in person in a follow-up meeting and I can now confirm that this meeting will be held on 1 October at 6pm at City Gates Church, Ilford (please note the change of venue).

To keep you updated I have set up this dedicated web page on our council site for residents to access and see the progress of these actions http://www.redbridge.gov.uk/ASB-YorkRoad

In the meantime, please continue to report problems in the area to the police using 999 in an emergency or 101 for non-emergencies, or to the council at https://www.redbridge.gov.uk/report-it/ depending on the issues you are reporting.

Leader, The London Borough of Redbridge